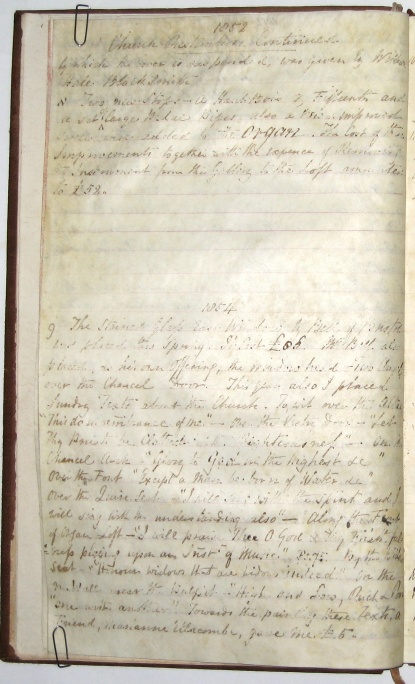 by which the cover is suspended, was given by William Hale Blacksmith

8 Two new stops – a Haut-Bois & Fifteenth and a set of large Pedal Pipes, also a new & improved swell were added to the Organ. The cost of these improvements together with the expence of Removing the Instrument from the Gallery to the Loft amounted to £52..

1854
9 The Stained Glass East Window by Bell of Bristol was placed this Spring. It cost £65. Mr Bell also placed, as his own offering, the Window head – Two Angels over the Chancel Door. This year also I placed Sundry texts about the Church. To wit over the Altar “This do in rembrance of Me” – over the Vestry Door – “Let Thy Priests be Clothed with Righteousness” – on the Chancel Arch – “Glory to God in the Highest etc” Over the Font “Except a Man be born of Water etc” Over the [?] Seat – “I will sing with the Spirit and I will sing with the understanding also” – Along the Front of Organ Loft – “I will praise Thee O God & Thy Faithfulness playing upon an Instr. of Music” PS.75. By the Widows Seat – “Honour widows that are widows indeed.” On the N Wall near the Pulpit – “High and Low, Rich & Poor “one with another.” Towards the painting these Texts, a friend, Marianne Ellacombe, gave me £5..