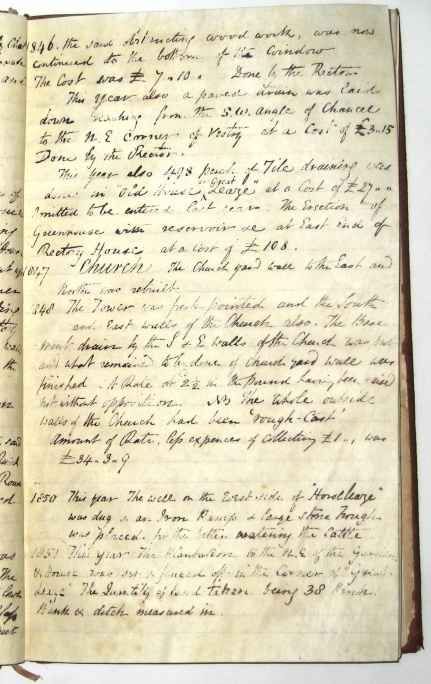 1846. the said obstructing woodwork, was now continued to the bottom of the window. The cost was £7..10.. Done by the Rector.

This year also a paved drain was laid down reaching from the S.W. angle of Chancel to the N.E. corner of Vestry at a cost of £3..15 Done by the Rector.

This year also 498 perch of Tile draining was done in “Old House [inserted above: or Great] Leaze” at a cost of £27.. .. Omitted to be entered last year. The erection of Greenhouse with reservoir etc at East End of Rectory House at a cost of £108.

1847 Church. The Church yard wall to the East and North was rebuilt.

1850 This year the well on the West side of “Houseleaze” was dug up & an Iron Pump & large stone trough was placed for the better watering the cattle.

1851 This year the Plantation to the N.E. of the Garden & House was set & fenced off in the Corner of “Great Leaze” The quantity of the land taken being 38 perch Bank & ditch measured in.