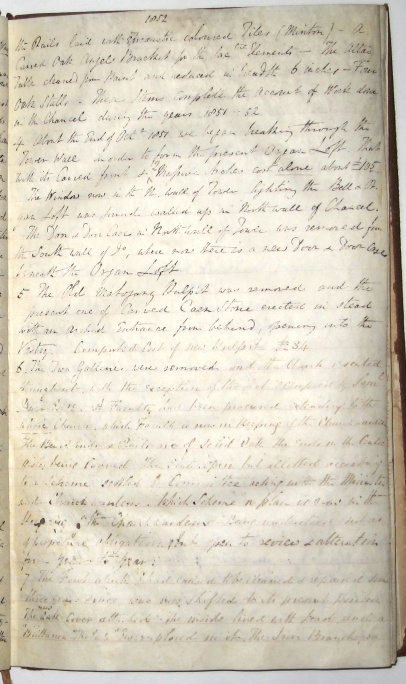 the Rails laid with encaustic coloured Tiles (Minton) – A Carved Oak Angel Bracket for the Sac.tal Elements – The Altar Table cleaned from paint and reduced in breadth 6 inches – Four Oak Stalls – these Items complete the account of work done in the years 1851-52

4 About the End of October 1851 we began breaking through the Tower Wall in order to form the present Organ Loft. That with its carved front & 2 Massive Arches cost alone about £105.

The Window now in the N wall of Tower lighting the Bell & Organ Loft was found walled up in North Wall of Chancel.

5 The Old Mahogany Pulpit was removed and the present one of Carved Caen Stone erected in stead with an arched entrance from behind, opening into the Vestry. Computed cost of new pulpit £34

6 The Two Galleries were removed and the Church reseated throughout, with the exception of the seat occupied by Samuel Dyer Esq. A Faculty had been procured extending to the whole Church, which Faculty is now in keeping of the Churchwarden. The Bench Ends & Rails are of Solid Oak, the ends in the Centre Aisles being Carved. The Seats open but allotted according to a scheme settled by Committee acting with the Minister and Churchwardens. Which scheme in plan is now in the keeping of the Churchwarden - Being understood not as of perpetual obligation, but open to review & alteration from year to year.

7 The Font which I had caused to be cleaned and repaired some three years since was now shifted to its present position The new Oak Cover attached – the inside lined with Lead, and a “Britannia [Metal?]” Ewer placed in it. The Iron Branch, by