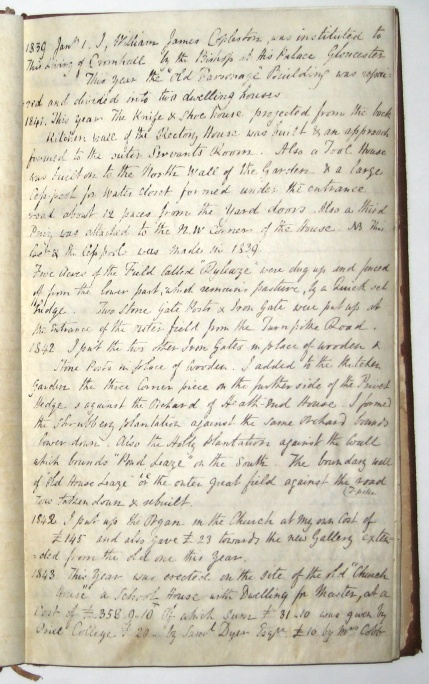 1839 January 1st. I, William James Copleston, was instituted to this Living of Cromhall by the Bishop at His Palace Gloucester.

This year the “Old Parsonage” Building was repaired and divided into two dwelling houses.

1841. This year The Knife & Shoe house projected from the back kitchen wall of the Rectory House was built & an approach formed to the outer Servants Room. Also a Tool House was built on to the North Wall of the Garden & a large cess pool for water closet formed under the entrance road about 12 paces from the yard doors. Also a third Privy was attached to the NW corner of the House. NB this last & the cess pool was made in 1839.

Five acres of the Field call “Ryleaze” were dug up and fenced off from the lower part, which remains pasture, by a Quick set hedge. Two stone Gate Posts & Iron Gate were put up at the entrance of the outer field from the Turnpike Road.

1842 I put up the Organ in the Church at my own Cost of £145 and also gave £23 towards the new Gallery extended from the old one this year.