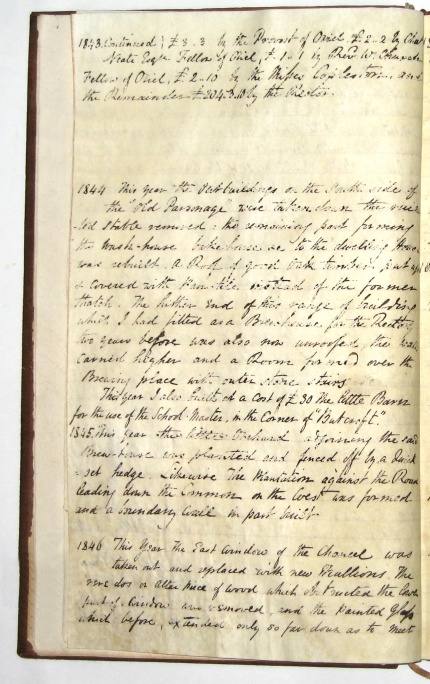 1844 This year the outbuildings on the South side of the “Old Parsonage” were taken down and the ruinated stable removed: the remaining part forming the wash house, bake house etc to the dwelling House was rebuilt. A roof of good oak timber put up and covered with pan-tile instead of the former thatch. The hither end of this range of building which I had fitted as a Brewhouse for the Rectory two years before was now unroofed, the walls carried higher and a Room formed over the Brewing place with outer stone stairs.

This year I also built at a cost of £30 the little Barn for the use of the School Master, in the corner of “Butcroft.”

1845 This year the little Orchard adjoining the said Brew-house was planted and fenced off by a Quick set hedge. Likewise the plantation against the Road leading down the Common on the west was formed and a boundary wall in past built.

1846 This year the East window of the Chancel was taken out and replaced with new mullions. The rere-dos or altar piece of wood which obstructed the lower part of window was removed and the painted gloss which before, extended only so far down as to meet