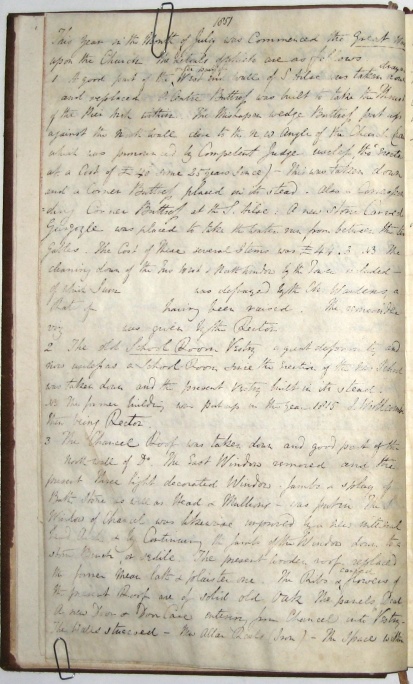 1851 This year in the Month of July was Commenced the Great Work upon the Church the details of which are as follows.

1 A good part of the outer part of West end wall of S Ailse was taken down [written above: drawn] and replaced. A centre Buttress was built to take the [Th…] of the Pier Arch within. The mishapen wedge Buttress put up against the North wall close to the N W angle of the Church (and which was pronounced by Competent Judge useless, tho’ erected at a Cost of £40 some 25 years since) – this was taken down and a Corner Buttress placed in its stead. Also in Corresponding Corner Buttress at the S Ailse: A new stone Carved Gargoyle was placed to take the water run from between the two gables. The Cost of these several Items was £44.3.13 The cleaning down of the two West & North window by the Tower included – of which Sum [blank space] was defrayed by the Ch. Wardens, a rate of [blank space] having been raised. The remainder viz [blank space] was given by the Rector.

2 The old School Room Vestry a great deformity and now useless as a School-Room since the erection of the New School was taken down and the present Vestry built in its stead. NB The former building was put up in the year 1815 J Woollcombe then being Rector.

3 The Chancel Roof was taken down and good part of the North wall of ditto. The East Window removed and the present three light decorated Window-Jambs and splay of Bath Stone as well as Head and Mullions – was put in. The S Window of Chancel was likewise improved by a new internal Lead Arch & by Continuing the Jambs of the Window down to a stone bench, or sedile. The present wooden roof replaced the former mean lath & plaister one. The Ribs & carved flowers of the present Roof are of solid old Oak the panels Deal, a new Door & Door Case entering from Chancel into Vestry. The Walls stuccoed – New Altar Rails (Iron) – the space within