Quarterly draws take place in Cromhall Village Shop at 11am on the last working day of February, May, August and November. 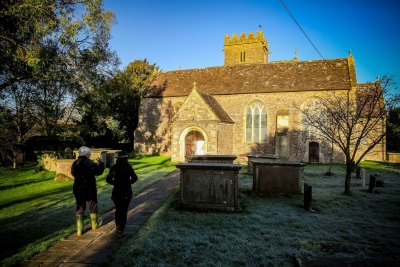 St Andrew's Church is a beautiful, historic building that has served the village over many generations.

For details of weekly services and to download pew sheets, please visit https://sites.google.com/site/saintandrewscromhall/home or www.facebook.com/CromhallChurch

The photographs on this page are kindly supplied by Rich McD Photography.

5Alive is the Benefice newsletter for CRoFTT: Cromhall, Falfield, Tortworth, Tytherington, and Rockhampton.

St Andrew’s Church is a valuable historic building and has been a place of worship since at least the 13th century. 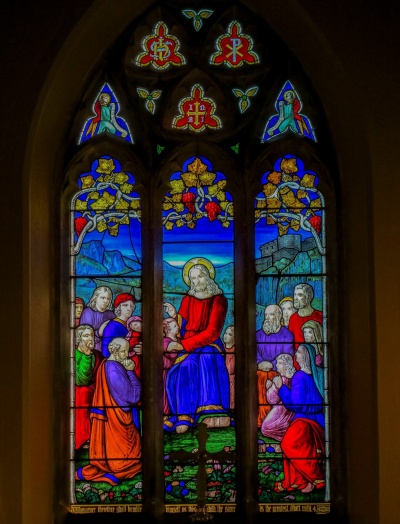 Even if you do not worship there regularly, the church is there for you for special services such as Baptisms, Weddings and Funerals.

The yearly care and maintenance of St Andrew’s Church and churchyard is very costly and so the 100 club was set up to raise funds to help with this.

The cost is £10 per number for a year, and quarterly draws take place in Cromhall Village Shop at 11am on the last working day of February, May, August and November.

If numbers requested exceed 100, the value of the draws will be increased. You do not have to live in Cromhall to take part in this.

To apply for numbers in the 2022 100 club draw, please put your cash/cheque (made out to ‘Cromhall PCC’), along with your name and address into an envelope marked ‘100 Club’.

This can either be sent to Ann Greenhalgh, Burlton House, The Burltons GL12 8BH or left in Cromhall Village Shop.

Many thanks, Cromhall PCC 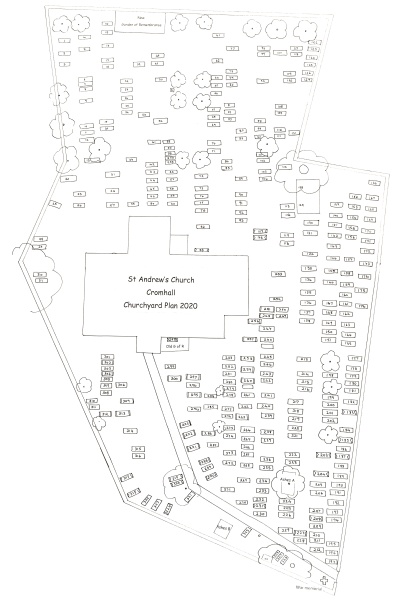 Click here to view a larger .pdf version of the churchyard plan.

She has now reached the point where it can be presented to villagers in the hope that you can fill in the missing names on some of the graves or plots without markings.

Ann has noted names and dates of death for all graves where possible. She has also made a list of names for the gardens of remembrance and may have missed one or two names for these.

The original plan is approximately 80cm x 50cm. She has photographed it and if you click here to see the .pdf, you will be able to enlarge the image.

If anyone can offer any additional information or identify any omissions please email Ann Greenhalgh: .

We have had a number of enquiries from folk tracing their family history. We do not hold any records (apart from current ones) in the Benefice.

They are all held at the Gloucester Records Office, who if they are contacted beforehand will assist.

Born in 1912, his twin brother George died at birth, Bill had polio as a child and his father was killed in the First World War, leaving his mother as a young widow to bring up Bill and his younger brother, Harold, alone. He recovered well from the polio but it left him with a permanent limp. These early struggles gave him great strength of mind and enormous sympathy with other people.

He worked first as a printer and then studied for the priesthood with the evacuated Kings College, London, during the Second World War, whilst also being a member of the Fire Service in Bristol and Bath. After the war he became a curate at Northleach, then priest-in-charge at Hewelsfield and curate at St Briavels before moving to Cromhall where he spent the next thirty years as the parish priest and assistant chaplain of Leyhill Prison. In addition he also became priest-incharge of Tortworth and Rural Dean. 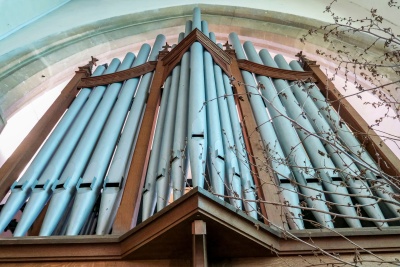 On retirement he moved with his wife, Marjorie, to Marazion in Cornwall to be near their son Christopher and his family.

While there he took services in almost every church and chapel in the area until he was physically unable to continue.

He sat on committees, on local councils, he was a Scout Commisssioner, a governor of several schools, a church bellringer and chaplain to the local ringers guild and always, always, always, in whatever capacity, he was at the service of his fellow human beings. It did not matter to Bill whether the person he was dealing with was a roadmender, an obstreperous toddler, a juvenile delinquent, a housewife, a murderer, a duchess, a farmer, a good Christian or the village drunk – if they were a person he loved them even if he deplored what they had done, but he did not judge, simply tried to love them enough to lead them into the right path. 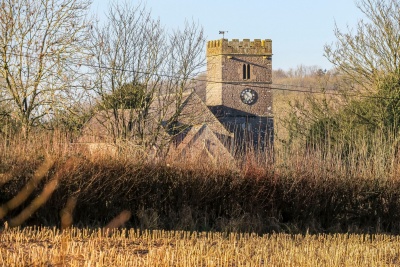 He was never narrow in his Christianity, taking services from behind the bar of the village pub when they wanted to celebrate harvest there and from a roundabout when a Steam Fair was held in the Rectory field. When pop music began attracting the attention of the young he did not condemn but invited them into church to play and sing during the service.

Indeed it was he who hosted the service at Tortworth at which Roy Hudd and the George Mitchell Minstrels performed.

His sermons were legendary for the singularity of both content and delivery; while the meaty Christian message was always there it was served up in a palatable and enjoyable manner. Who else, wishing to impress the virtues of perseverance on a congregation of Boy Scouts in Gloucester cathedral, would have taken “Incey Wincey Spider” as the text of the sermon?

In all this he was ably seconded by Marjorie, his wife for 63 years, who brought to their partnership the necessary practical qualities while sharing his faith and his service to anyone who needed it.

He is survived by Marjorie, his children Mary and Christopher, daughter-in-law Gill and grandchildren Naomi, Robert and Thomas.