In the Spring of 597 Augustine arrived on the Isle of Thanet with a delegation from Pope Gregory I, The Great, to King Ethelbert of Kent to carry out the conversion of the ‘English’. This is recorded by Venerable Bede (672-735), ‘the servant of Christ and Priest’, writer of The Ecclesiastical History of The English Nation

In 603 A.D. a delegation of ‘many men of great learning’ and seven bishops from the Celtic Church’s most celebrated monastery, Bangor Is Y Coed, Flintshire, came to Cromhall, in the sub-kingdom of the Hwicce, in Mercia. They came to consult a ‘certain holy and discreet man who was wont to lead the life of a hermit among them’. They asked him whether they should accept Augustine’s leadership and take him as their archbishop. The hermit advised them to test Augustine to see if he was ‘A man of God’. He said "Our Lord said, Take my yoke upon you, and learn of me, for I am meek and lowly in heart." The bishops asked how they could test this, he suggested that by arranging to arrive after him they could see if he rose to meet them. This would be evidence of humility.

The meeting took place at somewhere later named ‘St Augustine's Oak’ on the borders of Wessex and Mercia, near the Severn. Some people think this was Aust but others put it further inland. The border was the Bristol Avon and there is a tradition that the Cathedral, St. Augusine’s Abbey originally, on College Green in Bristol may have been the location. Augustine remained seated, the bishops were annoyed by this and were not prepared to accept his leadership. Bede was very pro-Augustine and clearly not very pro the Celtic Church, whom he saw as against the Anglo-Saxons. His account tells that Augustine was prepared to accept the differences between the two branches of the church if they would agree to conform to the same date for Easter, accept the ministry of Baptism and join in preaching the Gospel to the English Nation. They refused to agree to these changes (at the Synod of Whitby in 664, after Augustine's death on May 26th 604, the Celtic church accepted these conditions and was assumed into the main Catholic church.)

As a result of their rejection Augustine warned that the consequence would be that they would suffer at the hands of enemies. This prediction was fulfilled when many of the Celtic monks were killed in 613 by the pagan Anglo-Saxon army of ‘Aethelfrid The Destroyer’ at Chester, near Bangor, when they prayed on the battlefield for a Welsh victory.

The Hermit was presumably a monk of the Celtic Church who had gone into the wilderness, the ‘desert’, as the ascetic Celtic monks liked to call it, after the example of the early Egyptian monks, St Anthony and his followers, whose monasteries still exist in various Egyptian oases. Cromhall park would then have been an area of wild woodland which probably still extended as far as Michaelwood , ‘Mykylwood’, the Great Wood, and further, becoming Kingswood Chase in the middle ages. Early writers on Gloucestershire history such as John Smith of North Nibley, Sir Robert Atkins and Samuel Rudder recorded the story of the hermit. Rudder records that the remains of the hermit’s cell was still visible on Anchorite Hill in his time (1779) but he may have been quoting earlier writers as he did not say that he had seen them himself. 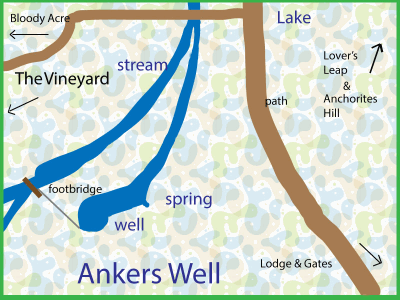 I had read in various accounts that there was a well called ‘Ankers Well’ in Cromhall although no-one knew where it was and some wondered if it was on the hill at Abbotside. I was reading an account of the Abbey of St. Augustine's in Bristol, which owned Abbotside in the Middle Ages. The Lord of the Manor, Richard of Cromhall, was eager to repair his mill-pool sluice at ‘Dunetone’ mill. He describes it as being below the spring called Ankers Well, ‘Ancrewell’. The description is of the spring in the park just beyond the park gates near the stream. The tithe map shows the site of a mill there and the current ordinance survey map shows a well and a spring at this location. Gordon Cornock tells me that this was the water supply for the Lodge when he was growing up there. This would put the hermit’s well just down the hill from where his cell is usually thought to have been, on the hillside near the location of ‘Lover’s Leap’ where the rock is exposed, sometimes this was called ‘Anchorite's Hill’. I wonder if anything would be visible to archaeologists? Where is Time Team when you need them?

This is an important story in that it dates from a period we call the "Dark Ages" because the records of the period are rare and we are "in the dark" about most of it. It would be better if we knew the name of the hermit but we are rather negligent in Cromhall to have ignored this story and forgotten it. Perhaps we need to make more of a celebration of the Hermit and at least record his story somewhere appropriate.

Article and illustration by David Wicks, 2014