With all the water about in the last few years and our problems with the 'foul water' manholes I thought it might be worth looking at the course of our brook which, after all is where our village gets its name. We boys spent many happy hours playing in it in our youth.

Sadly, children are not as free to do that these days. Hopefully families can still explore this feature and perhaps the Scouts might be interested in a stream survey. 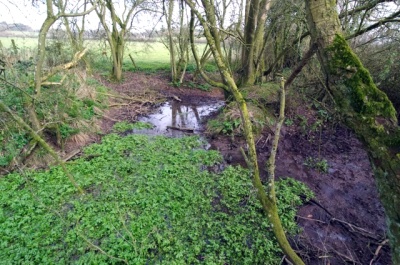 The main source of the brook is at Bibstone near 'Pullins Place' and 'The Cuckoo Pen' (Map reference ST 701 910) in a small pond where the footpath crosses to Brand Wood. This spring is presumably the same one as can be seen running across the bottom of the well in the Oak, issuing lower down the hill. From here it runs due south to Talbots End Farm passing under the lane (ST 702 904) where it crosses the fields in deep ditches. Several small springs run in from ponds on the slope up to the quarry, one of them rises close to the Downs road near Brand Wood. The brook is running in ditches here with small bridges enabling the field tracks to pass through the gateways on dry ground. The hedges here overhang the ditches and provide cover for deer and foxes occasionally. The primroses are good in the springtime.

At ST 699 893 in the fields behind the houses at Cowship Lane a small tributary which rises near Rag Lane joins the main brook. At this point the brook is running slowly through a shallow course which is overhung with branches and where the cattle can drink at several places. The brook has turned to head westward by this stage. It runs under Coles Bridge in Heathend at ST 697 895. We used to play under here when I was growing up. The bridge was interesting because we could see 'crabs' under it which I now know were freshwater crayfish. From here we could walk along the brook bed as far as 'The Folly' in Jubilee lane. This section which ran through Mr. and Mrs Pick's farm had been straightened in the nineteenth century, the original wiggles are shown as dotted lines on the enclosure map. There is a little footbridge at the Folly where we used to play as well. This part of the brook was much wider and we could find sticklebacks and minnows, possibly what we called 'tiddlers'. We always put them back. There were crayfish here too. I wonder if there still are?

The brook after the Folly ran between banks, with a hedge on the north side. There was a row of pollarded willows here we used to climb into sometimes. The brook passes under Tapwell bridge where another small spring feeds in from the direction of Stidcot Lane. The name 'Tapwell', which literally means a well or spring with a pipe, must have been a feature here. It passes the Sewage Treatment plant, where treated water joins it and continues past the site of the Roman Villa where the spring which must have supplied the Roman household runs in, when we have had a lot of rain. It then passes into Dyer's Brake and runs alongside Quartzite Quarry, now disused but containing several lakes and a lot of wildlife. It follows a wiggly course and passes a horse pool in the wood below Court Farm. It is passing, at this point, between the original Court houses of the two manors of Cromhall. Cromhall Abbots Court Farm to the west and Cromhall Lygon Court Farm to the east. 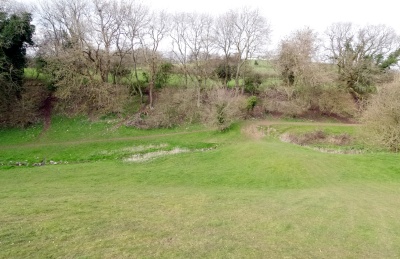 The Conygres, the Townwell brook passing through the fishponds sluice

The long meadow here is possibly the 'hahl', meaning a little narrow valley, of the original name of the village. From here it passes under the bridge in Fiddler's Bottom ('bottom' also means a small valley). We used to walk along the green pipe here and think we were very brave but I think now I would advise children not to! It is interesting to imagine this before the bridge was built when it was just a ford. This was quite an important road to Thornbury, Bristol and Berkeley and possibly more used than the road through Heathend which was perhaps more lonely and dangerous. The bend here may be the 'Crum' which gives the first part of the name of Cromhall and would mean a bend in a river. The meaning of the village is usually given as 'A crook of land in the bend of a river' but there is some discussion over this as both 'crum' and 'hahl' could mean a piece of land in a river bend so it would be saying the same thing twice. This sort of tautology happens when people use a word which has lost its original meaning, like 'Avon', the name of several rivers locally, which just means 'river' in Welsh and so we get the River Avon or the River River! There is a possibility that 'Crom' is from a British (Welsh) name for a bendy stream, 'Crumba', which, if this is the case makes it one of the very few streams with a really early name, like the Severn and the Frome. The stream runs into what was the mill pond for Sodom Mill after a small rivulet joins from the Conygres. This is the stream which fed the fishponds in the Conygres and which ran from the original Townwell spring. This branch of the stream rose in a pond behind the Chapel, crossed to the pond at the bottom of the hill and then down the side of the lane to the Conegres. It was fed by water from the ditches at Talbots End. Most of this water is now running into the sewage system and causing the problems with the overflowing sewage manhole covers in Spring Lane and the pumping station.

The brook used to divide to allow one branch to pass through the mill to drive the millwheel. The channel is evident behind the mill and the old arch where the mill race entered the mill can still be seen. The banks here are particularly fine in the spring when the snowdrops and then the primroses and daffodils are particularly good here. After the 'island' between the two water courses there is a low bridge after which the stream passes through a gap in the wall into the Park. This stretch of water used to be a place to observe brown trout. 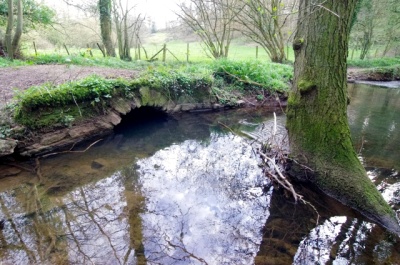 The bridge near the park wall

Beyond the Park wall the stream bends around to the east and is joined by a small channel which rises at the spring and well which I recently discovered is the ancient 'Ankers Well' named after the Cromhall Hermit. At this point there was another mill, named as 'Dunetone Mill' in the Abbey Cartulury Rolls. The Domesday account records that there were two mills in Cromhall and a mill is marked here on the Tithe map, although the buildings were not used as a mill by then and they have disappeared completely now. After this the stream flows into the Lake passing an island and running over the dam near the boathouse.

The stream runs under a well-constructed stone bridge and passes through Mill Covert. One of the fields here is called Pick's Mill so it suggests that another mill existed at this point. The stream runs out of the wood and across the parkland being joined by a watercourse which originates at Brinkmarsh and Whitfield on the other side of the M5, passing Brook Cottages and crossing under Gambril Lane. After this junction it is also joined by a stream which rises below Tortworth Green and runs through the Arboretum before it meets the stream here, where it is channelled under the motorway to run along below the ridge upon which the old windmill stands, at Falfield. Several watercourses run in here which are the remains of the mill leat for the mill situated here on Mill Lane. The Mill House still exists, slightly hidden by the motorway and related structures. The stream runs out of a culvert and flows past Heneage Court passing back under the motorway a couple of times, being joined by a brook which rises in Tortworth near Old Court Farm, before escaping into the meadows where it wiggles its way to Woodford. It joins the Little Avon at Middle Mill Farm where there is still a large pool beside Damery Lane. The Little Avon passes under the A38 at Woodford (presumably a ford once) and flows into the Severn after passing through Berkeley Pill.

It runs for roughly seven miles from Bibstone to Woodford and from Woodford to the Severn the Little Avon runs for four miles making it a flow of about eleven miles from its main source to the Severn. It has been running that way for a long time, so long that when the ridge which makes Abbotside Hill, Wick's Hill,Butcher's Hill, Leyhill was rising it was running across the surface, cutting down through it. This puzzled me when I was doing Geography at school until a Geology professor explained geological uplift and the formation of gorges!

Article and photos by David Wicks, 2014