A history of CLinC

The History of CLinC (Changing Lives in Chongwe) 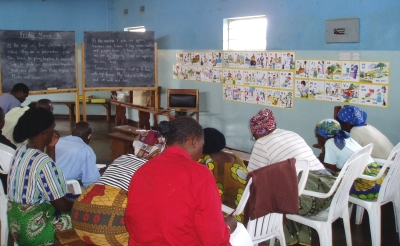 The link between Cromhall and Chongwe began when Ann and Roy Greenhalgh revisited Zambia in February 2003. Although they now live in Cromhall, they spent the first two years of married life in Chalimbana in the 1960s. Chongwe is situated 35 miles east of the capital, Lusaka, in Zambia, a country in Central Africa. Chalimbana is an old colonial station five miles south of Chongwe.

Ann and Roy were both teaching at a boys' boarding school in Chalimbana. Zambia became independent in 1964, and they remember the celebrations there one year on.

At that time, thanks to copper mining, Zambia was a thriving country, and many Europeans and Australians moved there to teach. Ann was better paid there than she had been in England.

Once the price of copper slumped, the country fell heavily into debt as it borrowed to try and maintain its fundamental services. While there was corruption, it is now seen that the World Bank policies were largely to blame for Zambia's continued decline in the 1980s and early 1990s. While the larger banks were paralysed, smaller ones collapsed. AIDS took hold, depleting the workforce and the younger management class. Teachers and nurses were dying faster than they were being trained.

The Greenhalghs settled back in England, but in 2003 they returned to Chalimbana, and were shocked to see the overall lack of progress over 40 years. However, their former school had grown from 120 to 1200 boys and girls, and the headmaster greeted them as though they were long-lost relatives. That girls were now attending school, even into the 6th form was a wonderful sight. A chance comment that "the school could do with a computer" set them thinking.

They stayed at the Zambian Anglican Council's Guesthouse in Lusaka and met one of the parish priests in Lusaka, Jackson Katete. He recommended that they contact Joyce and Brown Banda who lived in the administrative town of Chongwe. Joyce wanted to train as a lay reader because Chongwe had no priest or church. Congregations, mainly consisting of farmers, simply met on a verandah or in a barn for services.

At Easter 2003, an official link was in place. The Chongwe congregation asked for help in building a church, and Ann and Roy were advised to set off once again, to find what the Chongwe and neighbouring Kanakantapa communities really needed, rather than what they said they wanted.

Their research showed that the Kanakantapa farmers, many of whom were retired civil servants, had been given land in lieu of a pension. They had no money or farming skills and their traditionally-built houses of mud walls and grass roofs lasted only three years. Water was fetched from a river, and had to be boiled before drinking. 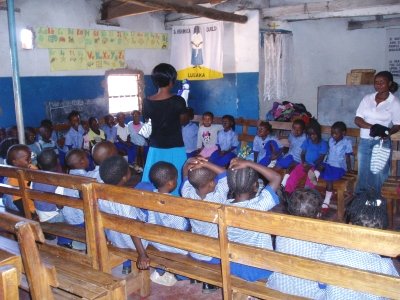 Ann and Roy consulted Mike Muleba, an NGO worker recommended by Harvest Help, a major UK based NGO. He could see that the farmers need to make money to feed, clothe and educate their families, and suggested a chicken project. Mike costed the setting up of the poultry farm, and showed how profits could be re-invested.

Back in Cromhall, a meeting was held with representatives from the Church and village, and fundraising began in earnest. There was everything from jams sold in the village shop to "chicken" coffee mornings. Over £1,000 was raised in the first year, which went towards the setting up of the chicken project.

1,000 day-old chicks were bought, fed for 6-8 weeks, and sold as broilers. The money was used to buy more chicks and to create a community fund to help people living in the Kanakantapa area.

In March 2004, Ann and Roy, with Peggy and Doug Collett and Sue Wray went out to see how the chicken farm was progressing. They stayed with the Bandas, visited the farmers, and found the project was not without its problems. The farmers had no experience of marketing or record-keeping and their turnaround time was slow, adding to the costs of the farm. The chicken project is still running, but won't be as big as they had hoped.

The Chongwe congregation presented the UK visitors with a chasuble for Reverend Pat to wear in Cromhall. It was made from green, brown and blue material with elaborate embroidery, and came with a roll of material to make altar frontages and hangings.

Since 2004, Cromhall Church has sent Christmas cards and letters to the Chongwe community, but when Father Sammy was moved to the Copperbelt, maintaining communication became more difficult.

In 2006, Ann and Roy went to Livingstone, in the south of the country, and near to the Victoria Falls to see Jackson Katete, and now keep in touch with him by email. Messages from the congregation there are displayed in the back of St. Andrew's Church in Cromhall, Christmas cards are exchanged, mentions are made in intercession prayers, and Jackson keeps an eye on the Church page on Cromhall.com.

If you would like to know more or become involved, please contact Ann Greenhalgh by email: or phone 01454 294200.