Explore other pages in: Local history

Slickstones Quarry is designated as an SSSI - a site of special scientific interest. The first fossils were identified there in 1938, with finds continuing to the present day. Over thirty different species have been identified, including reptiles, dinosaurs and mammals.

The rock in the quarry - Carboniferous Gully Oolite and Black Rock Limestone - is around 350 million years old, but it's thought that a cave system in this rock collected remains of various creatures in the Triassic Period - about 210 million years ago.

The fossils there aren't your huge dinosaur bone variety, in fact you'd need a microscope for many, but they are rich and varied, and some are - on a global scale - unique. 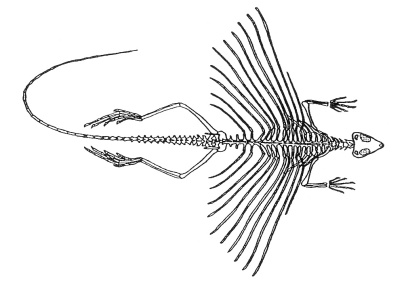 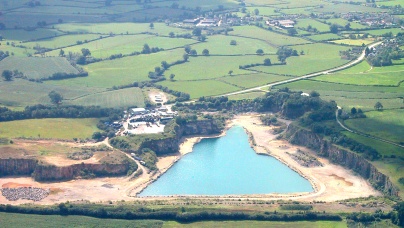 Aerial photo of Slickstones Quarry. The camera is pointing south; Talbot's End is visible at the top of the photo.

The most abundant remains are from sphenodontids, particularly Clevosaurus. There's also Kuehneosaurus - a gliding reptile (left), a Theropod dinosaur, a terrestial crocodile, and the oldest pterosaur remains in Britain.

There's even a carnivorous dinosaur named after the village: Agnosphitys cromhallensis. Don't get too excited, though - he's only two foot long, weighing less than two pounds, and probably ate nothing larger than insects.

Many thanks to Mike Benton at the University of Bristol and Byron Blessed at Fossils-UK.com.

Explore other pages in: Local history